The power of the family meeting displayed

There is a spontenous change sweeping among the communities of Alianda, Omgboa and Emgbecia village in Bileafe Sub-county as a result of Parenting sessions conducted in groups. Family meetings has been recognised in parenting session as one of the parents’ strength against the weaknesses experienced.

Mary, a 54 year old woman living in Alianda village in Abindi Parish could not wait to testify what transpired after she held a family meeting as a way of improving her parenting skills. After the training on positive parenting, Mary tried to call for a family meeting as she was disgausted of the status of her main house.

Amazingly, this meeting enhanced her children to join hands in roofing their four roomed house with Iron sheet. This house has been a grass thatched roofed for 13years and the corners of the house were said to have been leaking whenever it rained. Mary has 9 children, the four completed school and are employed while 4 are in school and 1 out of school.

Mary was a second wife of Joseph and she separated with her husband after accepting Christ Jesus as her personal Savior. And she now lives in her marital home with her 5 children. “The training I attended helped me to achieve this (Mary points to the house), after the training I came home and called for a family meeting. And I shared the issue that were discussed in the training with my children; like keeping the environment clean, digging the rubbish pit, having a descent household for accomodation, saving for the family investments and working as a team in the family development. And we discussed that the roof of our main house needed to be changed to iron sheets so that we could spend once other than changing the grass every after 2 to 3 years which has been costly. We agreed to share responsibilties in making the roofing a success. My elder son Fred chose to sign a loan from the Bank for buying ironsheets, saying this would be the easiest way for him to save. This is because the loan would be deducted from his accounts automatic, and so he would not fail to pay, back. Unlike a person who plans to save for a purpose, and when the money is got  other emergecy needs disrupts his saving and he fails to meet the goal of saving. Then my daughter Gatrude being occupied in her office, she supported the family with 400,000 Ugandan shillings as her contribution, my other sons fetched river sand, and provided labour as I cooked food and fetched water with other children. My family now sleeps in a good iron roofed house as a result of parenting sessions that allows parents to identify their parental roles and deal with their parenting challenges. Before the training, I would not control my emotions, but the training helped me to live according to the Bible teachings ‘listen much and speak less when provocative situations arose.”

Mary expresses her joy of having an iron roofed house. She remarked that having an iron sheet roofed house also helps her family as water harvest during rain season. Mary’s progress has been admired my the rest of the commmunity members as a result some families are participating in brick production and other have purchased iron sheets to improve their family housing. 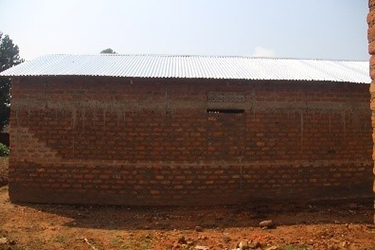 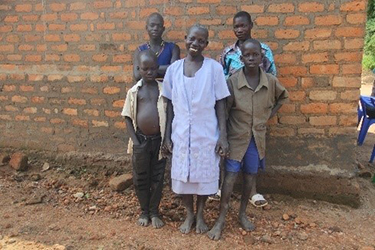 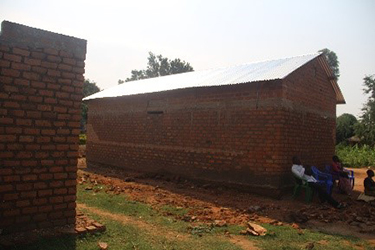 Mary poses behind her house with her children (in blue T.shirt-Emmanuel 19years, in sky blue & blue dotted shirt –Kizito 14 years in class 6, Henry 12 years dressed in blue sort & brown shirt,  in class 6 and open chest is Dan 10 years in class 2